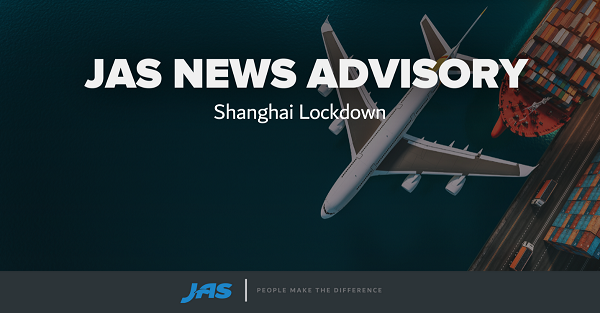 Shanghai will remain under lockdown as it reviews the testing results of the city's residents. The city was originally expected to remain under a staggered lockdown from March 28-April 5 as mass COVID testing was conducted to combat the current wave of coronavirus cases.

Air Cargo: Currently, the Shanghai Pudong International Airport (PVG) continues to operate on a limited basis. Many airlines have announced flight cancellations. Cargo delays continue to be expected due to limited manpower and trucking capacity. Special cargo handling such as physical inspection and on-site documentation process is still suspended.

Trucking: The current trucking capacity has been seriously impacted due to drivers' needing to quarantine and extensive traffic jams. Multiple surrounding cities have refused the entrance of trucks from Shanghai until further notice.

For more information, reach out to your local JAS representative. 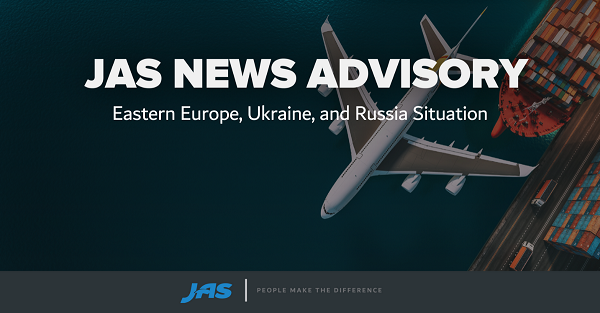 UPDATE (MARCH 11, 2022) As the world has seen, the events in the Ukraine have worsened and our thoughts are with all the victims of this conflict. The developing humanitarian crisis is tragic, and the management and staff of several of our European organizations have launched independent initiatives to contribute foodstuffs and supplies for various charitable organizations inside Ukraine, with delivery already underway. We are grateful and moved by their actions.

In view of the situation, JAS Worldwide has decided to suspend services involving shipments to, from, or through Russia or Belarus. This includes shipments by air, road or ocean and includes the Rail Service between Asia and Europe. We are aware that this decision impacts our customers, and we will work diligently with them to try to reduce any negative impacts. Specifically, for the Asia-Europe rail service we will provide alternative routings via our FCL and LCL Ocean freight services, or via our Blue World Orient flight operations.

We will continue to review our position and will make adjustments once the situation improves.

(MARCH 2, 2022) The events in Ukraine are impacting trade with the countries involved and all modes of transport are deeply affected. Trade restrictions are still in the process of being implemented and more seems destined to come as we move through what is a rapidly developing situation. Adding to the turmoil, private industry, in the form of steamship lines and airlines, are also taking independent actions in the interests of protecting their personnel.

Our Operational teams are monitoring the situation daily, assessing the impact and reviewing the inevitable delays. For the time being, under certain conditions and where possible, we will accept bookings to the impacted areas as the situation allows.

Stay in the know with JAS
Advisories
news.

To learn more about individual country operations, choose one from the navbar menu above.