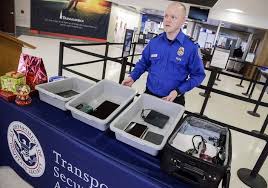 "The Transportation Security Administration (TSA) set another screening record during the 2017 holiday travel period, December 15 through January 2, 2018, with more than 42 million (42,043,588) passengers and more than 30.6 million (30,611,408) checked bags screened nationwide," stated an article by the TSA. December 22, the Friday before Christmas, had more than 2.5 million passengers and crew members screened. "It was the 11th busiest day in TSA’s history," TSA stated.

"On an average travel day, TSA screens approximately 2.1 million passengers and crew," stated the article by the TSA, "In the busiest days during the holiday travel period, TSA screened as many as 400,000 more passengers per day than usual."