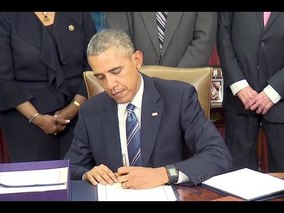 Last week, President Obama signed H.R. 644, the Trade Facilitation and Trade Enforcement Act of 2015. This is also known as the Customs Authorization Bill. This legislation is an important and relevant breakthrough for CBP because it is the first reauthorization for their agency since being created in 2003. "By authorizing CBP, the Act establishes a modern foundation for the agency’s critical missions to counter terrorism and transnational crime, advance comprehensive border security and management, and enhance U.S. economic competitiveness by enabling lawful trade and travel," stated an article by U.S Customs and Border Protection.

"The Trade Facilitation and Trade Enforcement Act aligns with these goals by enhancing CBP’s ability to prevent violations and take strong actions against violators.  It bolsters our ability to prevent and disrupt the flow of counterfeit goods into the U.S., a critical tool to safeguarding U.S. intellectual property rights.  The Act also formally recognizes CBP’s Centers of Excellence and Expertise (CEEs), one of the agency’s major efforts to modernize and streamline operations by consolidating certain operations by industry sectors.  It also strengthens CBP’s efforts around Preclearance, creating mechanisms to expand and fund these agreements, further extending CBP’s security capabilities abroad.  And, imperative to human rights protections around the world, the Act eliminates obstacles to preventing imports made with forced or child labor into the United States."

To read more on the trade enforcement and see the entire statement click here.