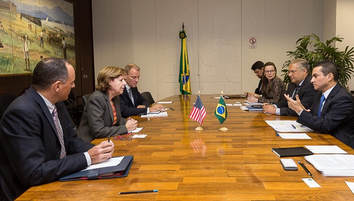 Brasilia (June 14th, 2016) - In a meeting with the US ambassador, Liliana Ayalde, the Brazilian Minister of Industry, Trade and Services, Marcos Pereira affirmed interests in advancing business relationships.

The meeting purpose was to ensure the continuity and strengthening of trade relations between the two countries, especially through the MDIC-DoC dialogue (Department of Commerce) and the US-Brazil CEO Forum.

This dialogue was created in 2006 and relaunched in 2010 and has been one of the priority mechanisms MDIC the last four years, which allows for cooperation in economic and commercial matters, with positive results through various exchanges, technical visits and semi-annual meetings.

The Minister, also expressed to the ambassador the willingness to carry out the edition 2016 of the CEO Forum (Brazil-US Forum of Senior Managers Companies), which had been canceled. Formed by twelve large companies in each country, the Forum, created in 2007, aims to facilitate discussions and make recommendations for economic development. The American presidential election could derail this year's edition.

Liliana highlighted the breadth and long-lived partnership between the two countries, with about $ 100 billion in trade, and interest in further advance. Minister Marcos Pereira gave a brief account of the current political situation in the country with an impeachment process in progress, but assured that the Brazilian institutions are strong and work well. "Although still interim, the government works as if it were definitive," he said.