Shipping to South America Made Simpler 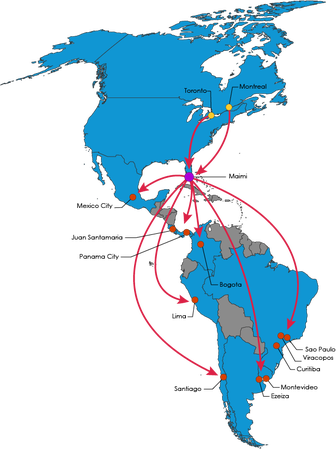 Recently, JAS Canada put in place a dedicated transportation service from Toronto and Montreal to Miami, to interline with the many air freight consolidations already in place and being managed by JAS Miami.

This simple, yet powerful solution lets our clients enjoy a more cost effective way to ship their North American orders to arrive together.

The advantage to this solution is that most of the product moves via freighter or dedicated capacity to its destination makes the routing more flexible and ultimately faster.

Please contact any of our Latin American or Canadian offices for more details.

Stay in the know with JAS news relating to the
Americas
region.

In today’s environment, shippers are faced with numerous challenges, from the immediate need to replenish drastically reduced inventory levels to budgeting logistics costs in a highly unpredictable environment. Blank sailings, carrier solvency, and steadily building port congestion is resulting in increased supply chain risk and lead time fluctuations. Global air cargo capacity has been reduced by over 25% making access to space more constrained due to overall demand and increased dwell time due to testing and customs inspections of PPE goods.

JAS is working closely with our customers to offer solutions that balance planning with responsiveness and agility, while working to provide service options that mitigate the increased costs and risks that exist with current market conditions.

Our Flight Operations solutions address the immediate and urgent needs of our customers. We have scheduled weekly flights from the following areas:

China to the USA with connections to Latin America

Europe to the USA with connections to Latin America

Additional flights will be added as needed.

JAS SEA-AIR services provide an alternative solution to customers requiring shorter lead times than traditional ocean freight while providing a lower cost option to air freight. We currently offer hubs in Singapore and Korea that connect Asia with the rest of the world.

​For traditional ocean FCL and LCL services, our ocean team aligns our carrier allocations and schedules with our customers’ forecasts. Services such as container and order management offer additional value to our standard ocean freight services.

​While our current priority is to work with your immediate needs, we do not want to lose sight of the need for long-term planning strategies so please contact us at info@jas.com or reach out to your local JAS representative for more information.

JAS Worldwide’s Mario Tenebruso, VP of Air Freight - Americas, recently sat down with Air Cargo FOCUS Magazine to discuss his background and his current role at JAS Worldwide. Among the topics discussed by Tenebruso; working with JAS customers during the pandemic, meeting cargo customers’ needs, the effect of trade wars on forwarders, and JAS Worldwide's “single system” software approach.