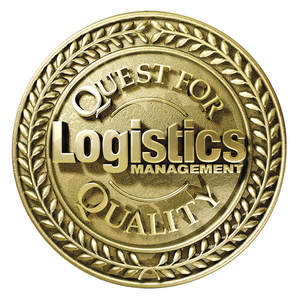 The Quest for Quality Awards are the gold standard for customer satisfaction and performance excellence for carriers, ports, and logistics providers worldwide.

“Quest for Quality Awards are uniquely purposeful in our market because the winners are determined by our readers—the buyers of logistics and transportation services who put these carriers and service providers to work on a daily basis all over the world,” said Michael Levans, Group Editorial Director of Peerless Media, LLC., the publisher of LM.  “Logistics Management readers are proud to honor them with the highest vote of service confidence when they do. There is nothing that compares to these awards in the market,” said Levans.

About the Quest for Quality Awards

To determine the best of the best, LM readers—logistics, transportation, and supply chain decision makers—rate carriers, third-party logistics (3PL) service providers, and U.S. port operators strictly on the basis of service quality. One of the most notable elements about the Quest for Quality Awards is that it calls these shippers to vote in the genre of services in which they are customers; therefore, they vote for the providers that they believe have best delivered on quality service in specific niches.

This year, LM had 4,500 ballots cast from logistics and supply chain decision makers resulting in 138 transportation and logistics services providers who earned Quest for Quality gold. Of these, JAS Worldwide was voted #1 in Customer Service for Airfreight Forwarders for 2018.


​Logistics Management magazine and logisticsmgmt.com are the leading business-to-business information resources for logistics and transportation professionals in charge of the planning, management, purchase of freight transportation services.

JAS Brazil has completed five more air charters successfully. JAS Brazil accomplished this by carrying out a 5-step shipment in record time, carrying more than 200 tons of parts and equipment for the automotive industry/sector.

From the collection at the origin to the final delivery point, it took 5 days of operation, involving JAS specialists and air analysts. In order to distribute the weight correctly the cargo was divided into five aircraft, three Charter Boing 777, one Boing 767-300F, and one Airbus A339-900 for heavy loads. All of which comply with the excellence standards, and have the agility and safety measures in place to assure the deliveries to JAS customers.

Talk to your JAS representative for more information on air charters for Shanghai, Hong Kong and Frankfurt.

Count on JAS to optimize your logistics processes.

The JAS RIO Branch, located in the heart of the city of Rio de Janeiro, has been improving its processes every day. They are doing this by expanding the team and structure, and qualifying to serve with excellence on all levels of the logistics chain. JAS RIO have a trained and experienced team for air, sea, and road freight operations. One of the distinguishing features of the JAS RIO Branch is their expertise in, and ability to serve the oil and gas industry segment. In addition to being AEO certified, the JAS RIO Customs Brokerage team specializes in Repetro-Sped (special customs and tax systems related to the oil and gas sector), which guarantees JAS more assertiveness in the process, optimizing time and costs for customers.

A further strength of the JAS Rio team is the in-depth know-how to serve the pharma industry with extensive knowledge of the processes and specific industry certifications required providing high performance in operations. JAS Brazil believes that a qualified team who is committed to the customers leads to success.

Here people make the difference! The RIO Branch is ready to assist you, count on JAS as your international logistics partner.

Over the course of the past few years, JAS Chicago has been one of the fastest growing and top performing branches within the global JAS organization. Then, in March 2020, the arrival of the COVID-19 pandemic and resulting disruptions threatened to derail the results and momentum: the culmination of many years of hard work.  Business continuity, especially consistency in high levels of customer service, was always goal number one, but shifting an entire office staff to a virtual work environment overnight while ensuring the safety of essential warehouse personnel was an incredible challenge.

While the immediate challenge was met head on, and successfully so, by the entire JAS organization, anxiety regarding the lingering economic impacts of the pandemic was ever-present. The challenge was now how does JAS adapt to a global industry that had essentially changed overnight.  Based on the feedback of customers, JAS invested immediately into an own-controlled flight network with additional adhoc charter space to inject much needed air capacity on key trade lanes.  Due to its strategic geographic location, warehouse, and airport infrastructure, Chicago became the US hub for both the trans-Pacific and trans-Atlantic flight operations.

In one month’s time, the uncertainty had begun to fade and the excitement about a new direction was taking hold.  By the end of April 2020, the Chicago branch had transformed from a successful large local branch into a key strategic global gateway servicing the entire JAS network.  This held its own challenges and many lessons were learned from issues that arose, but every challenge was met with hard work, determination, and an eye towards the future.

Over the following months, a continual drive to find efficiencies and improve the process and structure around the flight operations was a central focus.  The JAS Chicago team knew that this would ultimately bring value to their customers while offering a differentiator in the market for future growth.  Efficiencies in the warehouse were implemented in order to accommodate incredible volume growth in a limited space.  Warehouse efficiencies resulted in faster turn-around times from flight arrival to final-mile delivery. High performing staff were given opportunities to grow into newly created gateway leadership roles, while no less than six other promotions within the branch were executed.  New high-level talent was recruited and on-boarded that will one day grow into the future leaders within the Chicago branch and beyond.

In March of 2021, the annual USA Executive/Branch Manager meeting was held virtually.  As a result of their incredible performance and impact to the JAS global network over the course of a most challenging year, it was announced that Chicago was named the JAS USA Branch of the Year for 2020.  In the same meeting, it was announced that JAS Chicago would be expanding its footprint with plans to acquire additional warehouse space in the Chicago area in the very near future.  These two announcements illustrate what has made JAS Chicago a true success story: utilizing the success of the past to invest in the future.

In the face of all challenges, thanks to the continued dedication and innovation of team members, JAS Chicago is able meet the needs of their customers.  Especially over the last year, it is more apparent than ever, at JAS, people make the difference!