A Nation In Distress 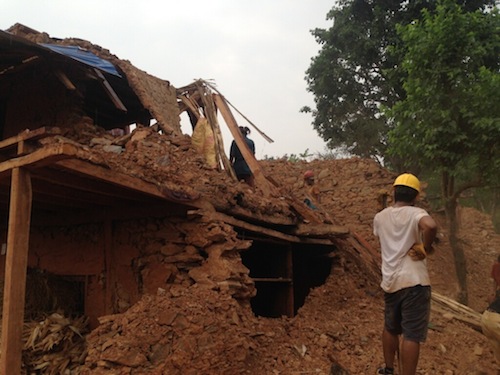 A Nepal Journal by Sarah Snodgrass reporting for JAS Worldwide
On April 25th, a massive 7.9 earthquake ripped through the remote Himalayan country of Nepal followed by another major quake a week later.

For three years, Sarah Snodgrass worked among the people of Nepal, specifically focusing on women and children at risk. JAS Worldwide is supporting her as she focuses on meeting the immediate needs of the Nepalese people. These are her reflections as she currently assists in the efforts in the rural areas outside Kathmandu.

The most recent journal entries are at the bottom of the page.

It's strange to be back in a place that is so familiar, but has changed so drastically since I last visited in January. In Kathmandu, the capital city, where building codes were [mostly] followed, the devastation is not nearly as bad as I expected it to be. Of course, many buildings have been rendered unlivable because of cracks in the foundation, but as I bicycled around the city yesterday, things have remained relatively intact. People continue to sleep outside, either because their home was destroyed or condemned, or simply out of fear. Tremors are a daily experience, and just yesterday, a 5.7 magnitude quake hit, just thirty or so miles to the east.

​As I go into the villages today, I'm expecting to see a much worse picture. The villages are the areas that have been hit the hardest, as their homes are poorly built and they sit on the sides of mountains.

The nation is in mourning and the trauma everyone has gone through is palpable. It's heartbreaking to witness and I feel mostly helpless to do anything.

Thanks to JAS Worldwide and other friends who have stepped up to help me participate in the Nepal relief effort.

TEAR DOWN BEFORE REBUILD

Yesterday was my first day in the villages - I wasn't prepared for the wide spread destruction throughout every single home. We spent the day leveling what was left of one family's home so that they could begin to rebuild. We shoveled through piles of rubble, sorting out big rocks and medium sized rocks. We picked ears of corn out from beneath the piles of debris and clay. Valuable seeds and grain were mixed into the dust and needed to be salvaged.
Picture
Families are left with literally nothing. Resources are so scarce, rebuilding is a daunting challenge.

​There is a great crew here with me in this village. A few Americans, a team of Indians from a church in Mumbai, and a handful of young Nepalis. It's six thirty in the morning now and after a long night of sleeping on the ground with only my pack as a pillow, we are about to head out once again. We'll go a little farther up into the mountains today to reach a more remote home.

100 Degrees Farenheit in the Shade

Yesterday was undoubtedly the most physically grueling day so far. We left our camp around 7am, which put us at the house we were demolishing by 7:20. It's already pushing 80 degrees by that time, which makes the work so much more difficult. Our crew has been working on this house (among others) all week, and yesterday, we knocked down the second story.
​
All of these homes are built with stones and mud, so I spent four hours with a pick axe undoing the walls rock by rock. By 9am, it had passed 100°, my arms and back ached, and I was craving rehydration salts (which are gross, so you can imagine the state of my body).
Picture
Since the villagers will rebuild with the same material, we have to sort out the big rocks from the rubble, as well as all of the wood. It's tedious and exceedingly unfun - not glamorous at all. But the team up here is great and no one complains.

Last night was rough, as a huge storm passed through and soaked through our tent. In the middle of the night, ten of us girls had to move all of our bags to the middle and attempt to patch holes with duct tape. A stray dog found his way inside as well, which caused quite a ruckus at 1am. Around 2am, a big aftershock jolted me awake again. Never a dull moment, and 5am came early.

Kathmandu had already looked like a war zone prior to the 2015 quakes. I first said that sort of tongue in cheek, but it's true and it's sad.
​
Between government corruption, poor infrastructure, and an impoverished population, many roads, buildings, and homes were crumbling before the earthquake ever hit. So at first glance, it's hard to tell what damage was caused by the quake and what was that way already.
Picture
I've been back in the city from the village for a few days and have had the opportunity to take the bicycle through town, talk with locals, and assess the damage. It's not good. Yesterday, I sat and had tea with my old landlord, and we lamented over the fact that the house he grew up in had been destroyed. I chatted with a taxi driver who I have known for years, and he explained how so many businesses that were already struggling are now in dire straits because of the lack of tourists. Thousands of people continue to sleep in tents in open areas and there are lines for food and water.

Not only has the country taken a hit in terms of physical destruction, but the psychological destruction is massive. People pulled the bodies of friends and neighbors from the rubble. No one feels safe indoors. The quake has set Nepal back in so many ways.
​
The rebuilding process will take a long time, but good work is being done. Locals and internationals alike have stepped up to the plate and progress is being made. Cynicism has infiltrated some of the media, but I have not lost hope. Nepal will rise again thanks in part to the efforts of humanitarian organizations, individuals from around the globe, companies like JAS Forwarding, and the Napali people themselves.
​
- Sarah

All photos copyright 2015, Sarah Snodgrass
If you would like to support the relief efforts in this earthquake-torn country, Sarah suggests contacting any of the following reputable organizations.
Samaritan’s Purse
World Vision
Medical Teams International
Save the Children
Tiny Hands International

DISCLAIMER:
Sarah is writing of her experience and observations in her personal capacity. The views expressed are her own and do not necessarily represent the views of JAS Worldwide, its employees, or subsidiaries.

Stay in the know with JAS news relating to the
Asia Pacific
region.

JAS Italy has been active in the alcoholic beverages industry for decades and has demonstrated its ability to deliver superior logistic solutions to exporters and importers during that time.

From Veneto, Tuscany, Refosco, Piedmonte, Abruzzo, Calabria…from all producing regions…Prosecco, Chianti, Barolo, Barbera, Sangiovese, Montepulciano, Aglianico, Fruili, and all other Italian wines are shipped with care for our customers.

JAS Italy together with destination offices colleagues ensure that the Italian flag for Wine & Spirits services solutions is raised on selected markets.

As economies around the world are suffering from the impact of Covid-19, businesses are experiencing losses, workers are without jobs, and many face the challenge of a complete upheaval of lifestyle. However, pharmaceutical companies are taking center stage in the Covid-19 fight, and one of these is a Korean conglomerate, SK Group, is seeing growth on the stock market and a new burst of innovation in the infectious disease landscape as the race for treatment approval for a Covid-19 therapy takes off.

SK Group, the 2nd largest group in Korea after Samsung with an annual revenue of $213.6B in 2018, has two arms of pharmaceutical subsidiaries, SK Pharmteco, the pharmaceutical intermediate, and API manufacturer & SK Biopharmaceuticals, the new drug development.

With support from JAS APAC & JAS Worldwide, JAS Korea has become a contracted freight forwarding business partner for SK Biotek as of last December, then after months of implementation period, JAS has been handling various types of Pharmaceutical export shipments by Air & Ocean to additional International Pharmaceutical companies in Europe.

Due to the nature of the cargo, pharmaceutical products, they must be mostly carried by air freight, using special equipment such as dry ice gel/ ice pack, cool/ reefer truck, temperature-controlled storage, and even RKNs which require thorough knowledge and experience to handle such a commodity properly and in a timely manner.

The RKN e1 is a one pallet size container, based on a second-generation active temperature control system and utilizes compressor cooling and electric heating technology, to meet the requirements of the pharmaceutical industry for smaller air shipments.
‍

The RKN e1 container maintains product temperatures in the +2 to +8 °C range, controlled room temperature (+15 to +25 °C) range,  JAS Korea has successfully arranged 11 RKN e1 for its door to door delivery to a Spanish Pharmaceutical consignee with Dap term in March, when the Pandemic was in the peak.

SK Pharmteco’s subsidiary, AMPAC is one of the strategic partners to a U.S. public benefit drug manufacturing corporation, which recently received federal government funding of $354 million for advanced manufacturing of America’s most essential medicines at risk of shortage, including those for the COVID-19 response. With its strategic partners, it has initiated manufacturing chemical precursor ingredients, active pharmaceutical ingredients (APIs), and finished dosage forms for over a dozen essential medicines to treat hospitalized patients with COVID-19-related illnesses.

SK Biotek will supply pharmaceutical intermediates to AMPAC and has appointed JAS Korea as the logistics provider for this project. The 1st air shipment was exported to AMPAC in California, USA by suing 5 x RKN e 1 in close cooperation with JAS San Francisco on June 15th, all 5 x RKNs were successfully delivered to AMPAC on the next day. After the ingredient’s analysis main orders will be placed shortly and JAS will continue to handle this business. Next opportunity will be export business out of AMPAC to overseas with the finished products.

JAS Korea is continuing to expand their reputation as the perfect solution for the transportation of pharmaceutical products in the market with these continued efforts excellent team-work. We are sure JAS will be leading the market in a near future.