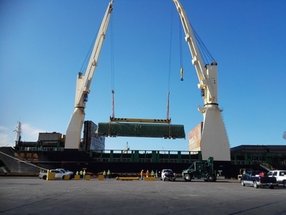 The train set was shipped from the factory of CRRC SIFANG Co., Ltd., in China (the world largest railway rolling stock manufacturer) at Qingdao.

After long planning and hard work of all parties, the shipment started at Qingdao in August 2016.

SINOTRANS Shandong Co., Ltd. arranged the transport of the six train units, accessories and lifting tackles from the factory in Qingdao to Houston, Texas.

JAS Projects – Oil & Gas (as partner of SINOTRANS Shandong Co Ltd) scope of work was to find the best way to arrange the transport of the six train units and accessories from Houston port to Avondale, Colorado.

Transportation Engineering has been involved to ensure the highly sensitive cargo reaches its destination in sound condition.

Once all technical railway documents got approved by Transport Engineering, the securing operation started and took about four days. The train units left Houston port in the beginning of November 2016 and reached Avondale, Colorado after 18 days of transit.

This project was implemented and executed successfully by JAS Projects Oil & Gas and their team to the highest standard in quality and satisfaction to the client.