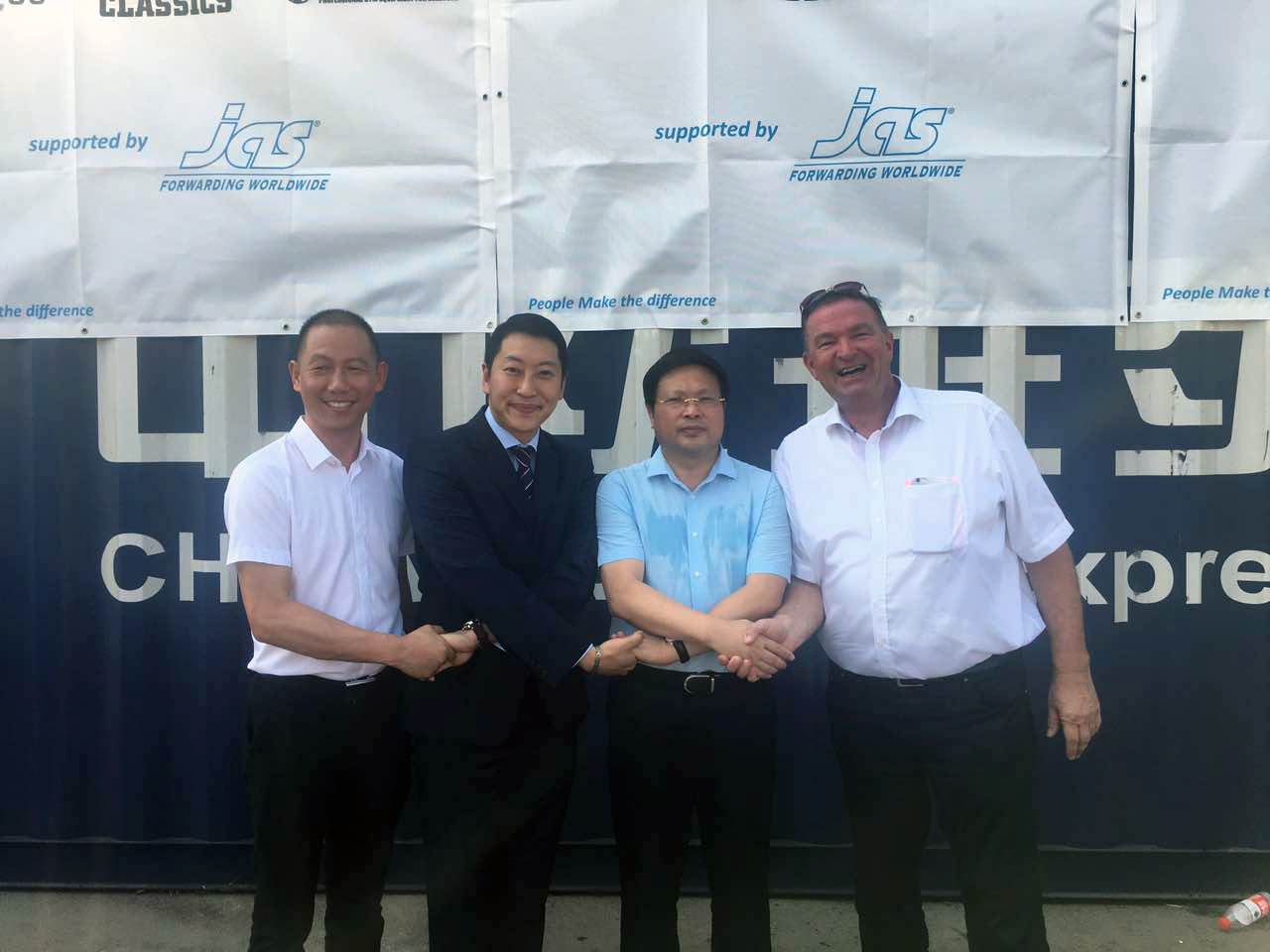 On August 16th 2018, the commencement of the first China-Europe block train service was marked by a ceremony in Fuzhou, Jiangxi Province. It was attended by top government officials from Fuzhou, Customs officers, key representatives from local enterprises as well as JAS corporate representatives from both China and Germany.

The launch of the first block train service was of enormous significance for both the Fuzhou government and JAS China. The train, carrying its first dedicated 41-containers containing products produced by local companies, marked the official start of a railway partnership between Fuzhou and JAS China. As part of China’s ‘Belt and Road’ initiative, both Fuzhou and JAS China seek to facilitate trade links between China, Asia, Europe, and the Middle East. It is strongly believed this will bring much better connectivity and will act to further boost trade for the local surrounding catchment area among Jiangxi province.

The move follows close collaboration among local municipalities, shippers, consignees, rail operator China Rail Express, local customs, and JAS China being the end to end logistics service provider. This train departs from Fuzhou, passes through the Manzhouli border and onwards through Russia, Belorussia, and Poland before finally arriving at Hamburg in Germany. This dedicated train service traverses 5 countries, traveling a total of 16,000 km in 17 days. JAS strives to do its best in providing customers with secure and reliable door-to-door rail service, which presents greater flexibility as faster option to sea freight and cheaper than air freight for time-sensitive goods. In addition, GPS monitoring and other value-added services are also available.

JAS China, with its head office in Hong Kong has 17 owned offices across China to cope with the ever-increasing logistics needs in the region. The organization has over 600 specialized staff, offers a wide range of products in air freight, ocean freight, sea/air services, customs brokerage, logistics warehouses and other related services. 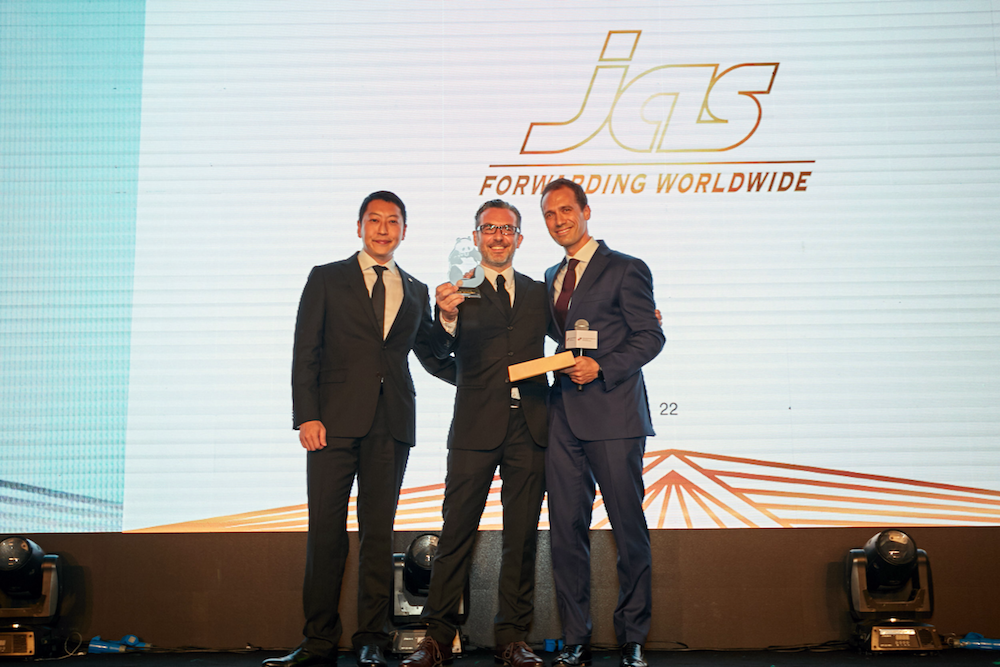 Organized by the China-Italy Chamber of Commerce (as “CICC”), Panda d’Oro Award 2018 and Annual Gala Dinner was hosted in Shanghai on June 9th, 2018. The award ceremony commended Italian and Chinese enterprises that have made excellent achievements in promoting bilateral trade between China and Italy. JAS China was honored with the “The Silk Road Panda Award" for its contribution and engagement in projects aimed at increasing connectivity along the new Silk Road. Bruce Ning, General Manager, and Mario Tasso, Head of Logistics of JAS Forwarding (China) Co., Ltd., attended the ceremony and received the award on JAS’s behalf.

Benefited by the promotion of ‘One Belt One Road’ policy by the Chinese Government, there has been significant development of rail infrastructures between China and Europe. Therefore, JAS China has now also extended its scope of business from traditional air freight, sea freight, warehousing, and logistics to rail freight between China and Europe, which is driven by strong consumer demand and limited air freight space in the market.

JAS China provides door-to-door FCL and LCL rail services on both Eastbound and Westbound, transporting light industrial goods, electronics, mechanical, and automotive parts. Eastbound shipments will be consolidated at Hamburg or Duisburg hubs operated by JAS Germany, and devanned at Zhengzhou, Wuhan or Chengdu hubs for further local trucking distribution. On the other hand, shipments going Westbound will be handled in JAS’s CFS service hubs in Wuhan or Hefei in China, and Hamburg or Warsaw in Europe. Rail freight service is a perfect solution if customers seek cost-effect transportation compared to air freight, and at the same time, with shorter transit time compared to ocean freight.

In addition, as JAS China is actively involved in logistics and freight forwarding services for Italian companies in China, Mario Tasso is pleased to be appointed as the coordinator of CICC’s Logistics Working Group in 2018. 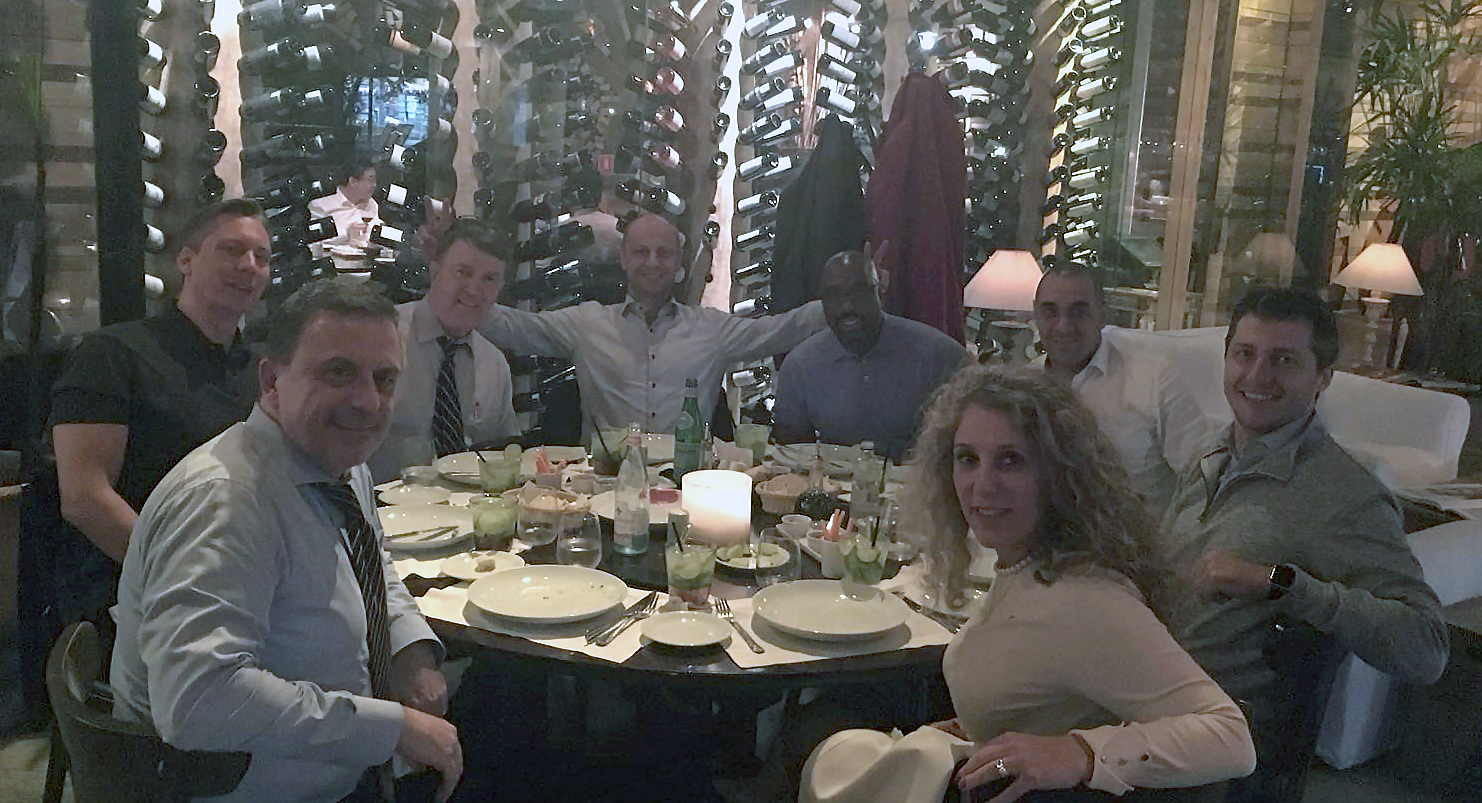 The Vice President of JAS Manufacturing, Dwayne King and the Vice President of JAS Automotive, Jim Ryan, just spent a very productive week in Brazil and Argentina.  They were joined in the tour by Mr. Robert Gulyas (Global Account Director for EMEA) and by Mr. Manuele Mazzacurati (VP Sales LATAM) and were able to meet with several important clients at both locations.

The development of key verticals across the Americas is a top priority for JAS Worldwide. Replicating best practices and sharing industry specific expertise is bringing a tremendous benefits to our customers.