As you may be aware, amendments to the International Convention for the Safety Of Life At Sea (“SOLAS”), will go into effect globally on July 1, 2016.

The recent amendment, which was adopted by International Maritime Organization (IMO) Member States, requires that a shipper verify the gross mass (Verified Gross Mass or VGM) of a container’s cargo/contents to the underlying carrier and terminal operator. While carriers, terminals and shippers alike will be affected by the new rules, the burden will primarily rest with shippers to provide the VGM.

Without a VGM, the amendments prohibit the vessel operator from loading a packed container.

As stated, from July 1st, the weight of the container and the cargo contained therein must be documented. Estimated weights are not allowed.
​There are two options permissible in determining the weight or Verified Gross Mass (VGM) of the cargo and container.

They are as follows:

Method 1: Weighing
After it has been completely packed and sealed, the container can be weighed. The weighing can be performed by the shipper or by a third party contracted by the shipper (please refer to Chapter 5.11 of the SOLAS guideline).

Any scale, weighbridge, lifting equipment or other devices used to verify the gross mass of the container must meet the applicable accuracy standards and requirements of the state in which the equipment is being used (please refer to Chapter 2.1 of the SOLAS guideline).

Method 2: Calculating
All packages and cargo items may be weighed individually (including the mass of pallets, dunnage and other packing and securing material) and must be added to the tare of the container visible on the exterior of the container (please refer to Chapter 5.1.2 of the SOLAS guideline).

There is currently no single document uniformly determined to be acceptable to verify the weight. Rather, the information can come via a weight certificate, separate documentation, or part of the shipping instructions.The amendment states that “irrespective of its form,” the document declaring the VGM should be signed by a person duly authorized by the shipper.

JAS unless otherwise notified in writing, will ensure that the VGM is communicated to the carrier by one of the following methods:
‍

The carrier itself is not obliged to cross-check the VGM received. Independent of the party verifying and sending the VGM, it remains the responsibility of the shipper that the carrier and terminal operator receive the information in time.

Once the Ocean Carrier receives the VGM, the Shipper’s responsibilities are complete.

However, it is clear that if the VGM is not received by the VGM cut off, the container cannot be loaded on to the vessel.

As we get closer to the deadline, and industry groups coalesce into creating common forms, we will provide the documentation for the shipper’s certification.

Relevant Documents can be found below 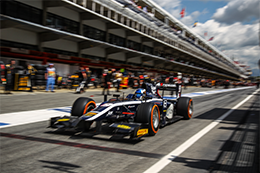 The twelfth season of the GP2 Series, a motor racing feeder series that is run in support of the 2016 FIA Formula One World Championship, is officially underway. The 2016 series kicked off in Barcelona, Spain on May 14-15, 2016. JAS is proud to continue the sponsorship of GP2 driver Raffaele Marciello. Raffaele will be driving for the Russian Time team this season!

A typical race weekend is composed of one 30 minute practice session and then another 30 minute qualifying session, which is followed by two races that typically take place the following two days after the qualifying race. Raffaele qualified 12th before the official races on May 14 & 15 stating "After a really long break, a new GP2 season has started. What can I say about my performance in Barcelona? All in all, I am satisfied. During qualifying [race] the car was well-balanced but I lacked a bit of speed, so I had to settle for 12th place." Raffaele placed 8th on the 14th in race one and then placed 5th the following day in race two! Raffaele took home a total of 10 points! He continued in his statement about the races, saying, "I knew I could do better in race one, and I did. When I found myself in 14th place I decided to increase the pace and attack with more confidence. It went well, and thanks to a series of overtakings – a few of which were really nice – I climbed to 8th place, and managed to take home four points. On Sunday I started in pole position and tried as hard as I could to stay in front, but at the moment there [were] a few drivers who [were] one step ahead. Still, I obtained a good fifth placement and six more points."  In the GP2 series, the driver with the most points at the end of the season is awarded the championship.

Raffaele concluded his statement by saying, "Considering that it was my first official race with my new team (Russian Time), I cannot complain. In about 10 days, in Monte Carlo, I aim to do even better."

JAS is proud to sponsor Raffaele and they, like him, are excited to see him continue to improve and gain points!  Watch the GP2 series to keep up with Raffaele and cheer him on!